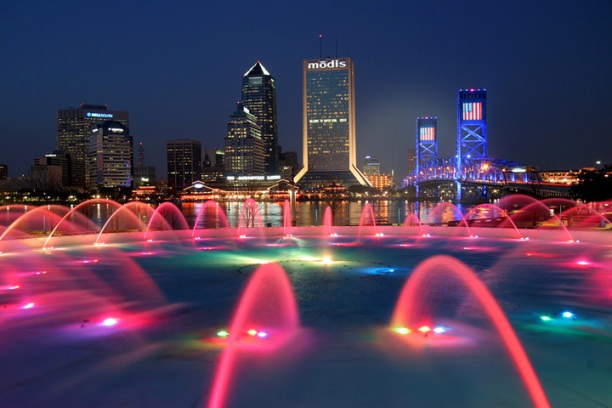 Nicknamed the First Coast by some and Jax by others, Jacksonville is Florida’s largest city—and, at 875 square miles, the largest city by area in the continental United States. With its entrepreneurial spirit, this sunny, historical community in northeastern Florida has left a sizable mark on multiple industries, from fast food to the motion picture business. It’s also the home of a giant owl, a misleadingly named tree, and the world’s foremost dinosaur poop collector.

1) Friendship Fountain on the Southbank Riverwalk is one of the city's most recognizable landmarks. The massive self-contained fountain can blast 3500 to 6500 gallons of water 100 feet in the air every minute, while 265 multicolored lights turn the mist into a rainbow-hued spectacle. Completed in 1965, the magnificent water feature is considered one of the largest on earth.

2) Civil rights leader A. Philip Randolph grew up in Jacksonville. Randolph created the first African-American labor union, the Brotherhood of Sleeping Car Porters, in 1925. He also pushed President Franklin D. Roosevelt to end discrimination in hiring practices on the basis of race, color, creed, or national origin in the federal government and defense industries. Randolph was among the key organizers of the March on Washington in 1963, where Martin Luther King, Jr. gave his iconic “I have a dream” speech.

4) The southernmost battle of the Revolutionary War took place within Jacksonville’s current boundary. Forces from British-held Florida surprised a group of about 100 American troops on May 17, 1777, killing or capturing 47. Another 24 American militiamen were killed by Creek Indians allied with the British. The fight known today as the Battle of Thomas Creek took place three miles north of where the Jacksonville International Airport now stands.

5) The Jacksonville farmers market, founded in 1938, is Florida’s oldest. More than 20,000 people visit the daily market each week.

6) It probably won’t surprise you to learn that this city was named in honor of our seventh U.S. president—before he assumed that office. Jacksonville started out as an intersection between the St. Johns River and a British road that extended from St. Augustine to Georgia. Known originally as Cow Ford, the crossing was renamed Jacksonville in 1822, after General Andrew Jackson had served as Florida's military commissioner the previous year.

7) During World War II, the now-defunct Jax Brewing Company might have invented the six-pack. Because it couldn't afford to keep selling beer in expensive aluminum cans (steel had been requisitioned for the war effort), it began bottling its brews in glass longnecks and selling them in sacks of six.

8) Perched outside the main branch of the Jacksonville Public Library is a 25-foot-tall bronze owl. It was cast by sculptor Larry Kirkland as an homage to Athena, the Greek goddess of wisdom, knowledge, and reason, whose symbol is an owl.

9) The Professional Golfers’ Association (PGA) Tour has been headquartered in Ponte Vedra Beach, a suburb of Jacksonville, since 1979. Every May, the Players Championship tournament takes place at TPC at Sawgrass, a nearby golf course.

10) On May 3, 1901, the third-largest urban fire in U.S. history struck Jacksonville. At 12:30 a.m., some chimney embers were blown onto flammable stuffing material at a local mattress factory, igniting an inferno that raged on for eight hours and destroyed 2368 buildings. After the smoke finally cleared, nearly 10,000 people were homeless.

11) In 1953, a restaurant called Insta-Burger opened at 7146 Beach Boulevard. Inside, a special oven called the Insta-Broiler could cook 400 patties an hour. Despite its supercharged output, business dwindled until new owners brought the restaurant and renamed it Burger King.

12) Jacksonville covers an incredible amount of real estate. How did this place get to be so expansive? In 1967, voters decided to consolidate Jacksonville with the rest of its surrounding county to increase its tax base. The resulting footprint was 20 times larger than the city's original size.

13) According to a report published by the U.S. Census Bureau in May 2016, Jacksonville is the 12th fastest-growing city in America.

14) The longest-serving mayor in Jacksonville’s history was one of Teddy Roosevelt’s Rough Riders. Democrat John T. Alsop Jr. held the city’s highest office from 1923 to 1937 and from 1941 to 1945.

15) The Jacksonville Jaguars joined the National Football League as an expansion team in the 1995 season. Since then, the team has won only five postseason games, but hope springs eternal. Their home stadium, EverBank Field, is located on the St. Johns River in downtown Jacksonville.

16) Completed in 1953, the distinctive Mathews Bridge was originally painted silver. Then, in 1983, it was repainted maroon to match the primary jersey color of the Jacksonville Bulls, a United States Football League club. The Bulls folded in 1985, but the bridge is still maroon.

17) Every Thanksgiving weekend, thousands of people watch the festive Jacksonville Light Boat Parade. For this holiday spectacle, a procession of boats covered in Christmas lights makes its way through the downtown area on the St. Johns River. A huge display of fireworks follows the parade.

18) New York City was the nexus of the film industry in the early 20th century, but snowy winters forced some movie studios to open outposts in Florida so they could keep shooting year-round. From 1908 to 1918, more than 30 film studios popped up in Jacksonville, earning it the nickname “The World’s Winter Film Capital.” Most had closed or relocated to California by 1920, but Jacksonville remained a popular filming location. Scenes from Cool Hand Luke (1967) and G.I. Jane (1997) were shot here.

19) You could go to EverBank Field and watch the NFL Jaguars play, or you could check out some real ones at the Jacksonville Zoo & Botanical Gardens. The most famous among the zoo's collection was a black male named Zorro. Brought to the zoo in 1967, he fathered 12 cubs, and almost all of the captive black jaguars in North America are Zorro's descendants.

20) Engraved onto the Veterans Memorial Wall in downtown Jacksonville are the names of more than 1500 veterans from all six service branches (Army, Navy, Air Force, Marines, Coast Guard and Merchant Marine) who lost their lives in the line of duty. Sixty-five feet long, the wall commemorates veterans from every American war since WWI.

21) In 1986, Floridians Will Fadeley Jr. and Eugene Hajtovik traveled all the way from Jacksonville to New York City on an airboat. Their 13-day, 1100-mile trip is the longest recorded voyage to be completed by such a vessel. The duo arrived in New York harbor on July 3, just in time to attend the Statue of Liberty’s centennial celebration.

22) In 1979, Dr. Frances Barnett Kinne became the first woman to serve as president of a Floridian university. She led Jacksonville University as president for 10 years and then served as its chancellor from 1989 to 1994. In 2017, she celebrated her 100th birthday.

23) Credited with pioneering the southern rock genre, the Allman Brothers Band was formed in this city in 1969. The hugely influential group put on its first live performance at the Jacksonville Armory on March 30 of that year.

24) Bad journalism rescued Jacksonville’s favorite tree, a sprawling live oak in Jessie Ball DuPont Park. Roughly 250 years old, it stands more than 60 feet tall with a trunk measuring 25 feet in circumference. In the 1930s, when developers hinted at chopping it down, local reporter Pat Moran fabricated a story about an important peace treaty between Native Americans and European settlers being signed under its branches. The story had the desired effect, and the tree, now (erroneously) called the Treaty Oak, was spared.

1 thought on “25 Things You Should Know About Jacksonville, Florida”